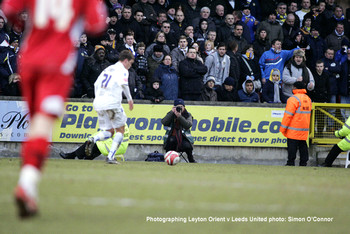 Sports mad Tim started taking football photographs in 1985 to make a historical record of Leyton Orient, the team he supports and for whom he became official photographer five years later. The project developed to extending to covering football all around the country, recording many grounds that have since been demolished or changed beyond recognition.

From 2001-2007 he photographed football in Italy, culminating in a book 'Calcissimo - The Spectacle of Italian Football'.

More recently he has been taking photographs for Surbiton Hockey Club, with his pictures being used in match day programmes, on the club's website and for the club magazine, which he also edits.